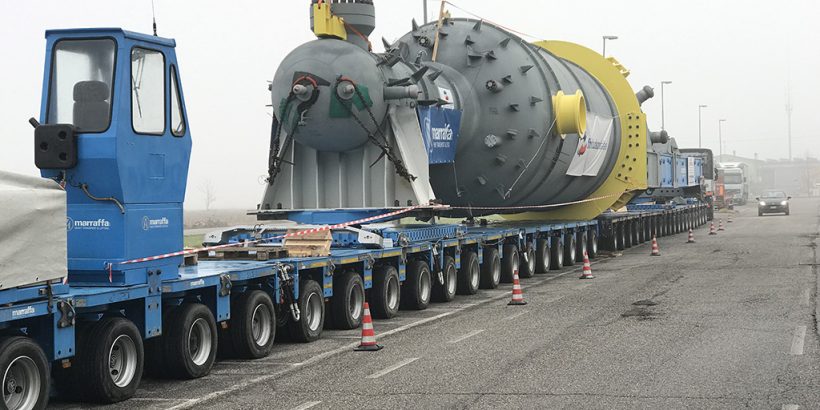 Between the end of 2019 and the first months of 2020, MARRAFFA, a leading company in the field of exceptional transport and lifting, was the protagonist of some of the most complex exceptional transports realized in the whole of Italy. The MARRAFFA team was also involved in the removal of a block of radioactive waste that had been buried for half a century in the “Irreversible Pit 7.1” of the Enea research centre in the district of Trisaia, in the municipality of Rotondella, in the province of Matera. The “giant” 54-cubic-metre mass was buried at a depth of 6.5 metres. It was a 130-ton block of cement, divided into four parts, which needed 6 days of crane manoeuvres to close the seven-and-ahalf year old construction site necessary to complete the removal of the monolith.

Another activity of which Managing Director Michele Marraffa’s company is particularly proud is one carried out in Foggia, at the Istituto Poligrafico e Zecca dello Stato for the realization of a Green Data Center. The new plant houses the necessary equipment to ensure operational continuity including IT Disaster Recovery services provided by the Poligrafico dello Stato. This is the first construction of its kind in Italy, in which the Marraffa team was happy to give its assistance for the building project.

The most “exceptional” transportation, in chronological order, that involved the highly specialized exceptional transport and lifting company MARRAFFA, took place at the beginning of this year in Gallipoli (near Lecce) and saw several company employees involved in the handling of “Utopia”, the new maxi catamaran that is set to become the flagship of Escursioni La Torre Vado, a company which deals with maritime tourism and boat rentals, offering boat trips on both the Ionian and the Adriatic sides of the peninsula. The new boat, a “Catmarine 60 Passengers” model, was launched along the north coast of Gallipoli, near the basin of Porto Gaio. The luxurious, 18 m long and 7 m wide vessel, with a tonnage of 35 tons, was built over two and a half years by the team of the Catmarine shipyard in Miggiano (LE) thanks to the employment of workers and designers from the Salento area and the design was entrusted to local professionals. The new catamaran was transported by the Marraffa team from the industrial area of Miggiano to Gallipoli, after a design period of about eight months.

In Cellino San Marco, land of good wine, MARRAFFA was involved in the complex operations necessary to transfer 12 wine tanks of one of the most important wineries in the Salento area. The handling operations consisted in moving them from the old headquarters to the new location of the winery. Two cranes at the start took care of the shooting to put each mega load placed later on a self-propelled SPMT for transportation to the new site. On arrival, two other cranes carried out the verticalisation of the tanks. 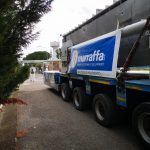 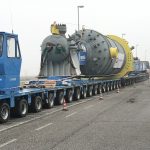 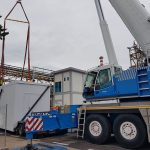