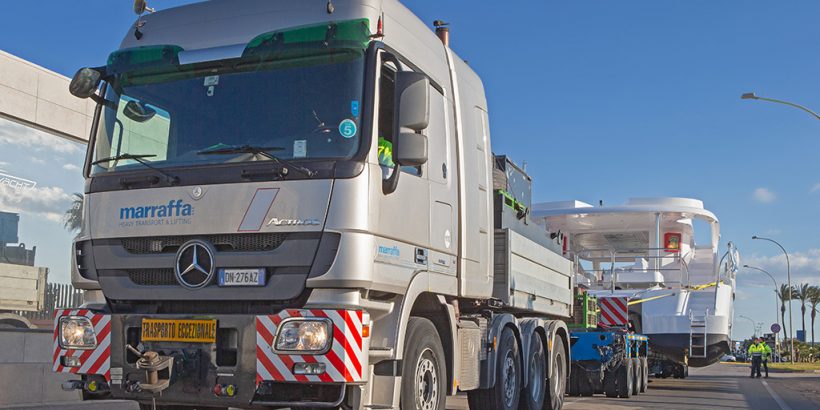 The most “exceptional” transportation, in chronological order, that involved the highly specialized exceptional transport and lifting company MARRAFFA, took place at the beginning of this year in Gallipoli (near Lecce) and saw several company employees involved in the handling of “Utopia”, the new maxi catamaran that is set to become the flagship of Escursioni La Torre Vado, a company which deals with maritime tourism and boat rentals, offering boat trips on both the Ionian and the Adriatic sides of the peninsula. The new boat, a “Catmarine 60 Passengers” model, was launched along the north coast of Gallipoli, near the basin of Porto Gaio. The luxurious, 18 m long and 7 m wide vessel, with a tonnage of 35 tons, was built over two and a half years by the team of the Catmarine shipyard in Miggiano (LE) thanks to the employment of workers and designers from the Salento area and the design was entrusted to local professionals. The new catamaran was transported by the Marraffa team from the industrial area of Miggiano to Gallipoli, after a design period of about eight months.

“It was a complex activity that required a lot of attention – said Giovanni Marraffa, Project Manager of the company in Martina Franca – considering the volume of the cargo. Our technical office was responsible for the meticulous planning, which was reflected in the subsequent implementation”.

An “exceptional” professional. Marraffa’s business, therefore, consists in the supply of exceptional transport, national transport and crane services, aimed at all kinds of activities. The Apulian company has been operating for about 30 years using highly specialized personnel with which it has consolidated its position in the Italian and European transport sector.

Michele Marraffa, founder of the company and still its director, has built up a strong organization – which has now become a point of reference in the sector – on the basis of his working experience in the handling sector in the widest sense of the term. Around him he has been able to create a group of people with whom new challenges are faced on a daily basis; challenges that their sound, continually updated professional experience allows them to face.

The launch took place along the north coast of Gallipoli, at the De Santis dock, which lies near the Porto Gaio basin; the maxi catamaran was therefore transported from the Miggiano industrial area and escorted using special vehicles, to Gallipoli.

This was the most “exceptional” transport ever performed on public roads in the lower Salento: for this reason it was carried out with extreme caution along approximately 70 km of the planned route, on a 46 m long convoy, heading north from Miggiano towards the Lecce-Leuca road and then joining up with the Lecce-Gallipoli (along the route dozens of road signs had to be removed and then reassembled). Two 250-ton cranes were used to lift the maxi catamaran, and several vehicles were also involved as safety cars. 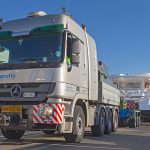 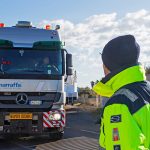