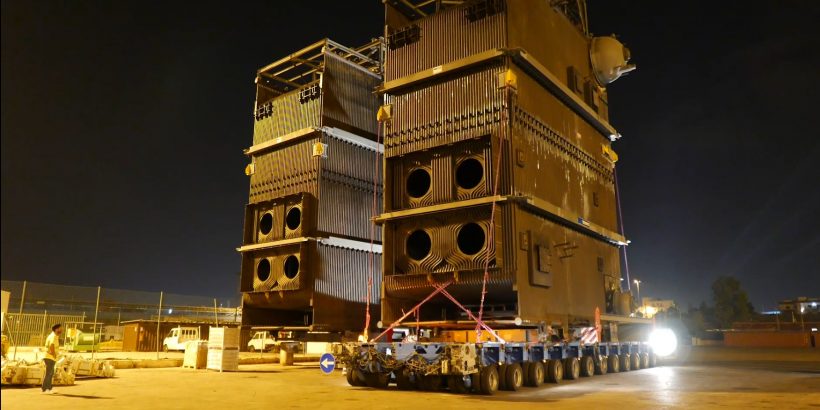 MARRAFFA rose to the challenge. The merit lies in meticulous preparation by our team and the use of an appropriate fleet of vehicles. Two abnormally large boilers (10.80 x 8.22 x 15.32 metres high and weighing 200 tonnes each) were transported 10 km, from their construction site to the port of Taranto; a journey which required careful study and preparations by the MARRAFFA technicians in the months prior to the transportation. The vehicle used for this operation was composed of 18 coupled modular axles (12+6 split) towed by a Goldhofer 600 HP Self Propelled Modular Trailer. To allow safe passage it was necessary to carry out accredited engineering studies on the load-bearing capacity of two bridges, as the convoys accounted for around 270 tonnes each.

This type of job has become common place, every day work for MARRAFFA, but compared to other similar loads, these two transports included an extra element of difficulty as the centre of gravity of each load was exceptionally high, at over 12 metres above the loading bed; a situation that required meticulous study of all the inclines that the convoy would face and considerably more complicated anchorage.

During transportation, two teams of technicians cut and then reconnected two Enel power lines and a further Telecom wire due to the convoy’s height. It was also necessary to dismantle around 800 metres of guard-rail and a further 100 metres of new concrete jersey central reservation.

After a few days wait in the Port of Taranto the two boilers were loaded onto ships heading for the French port of Laverà.