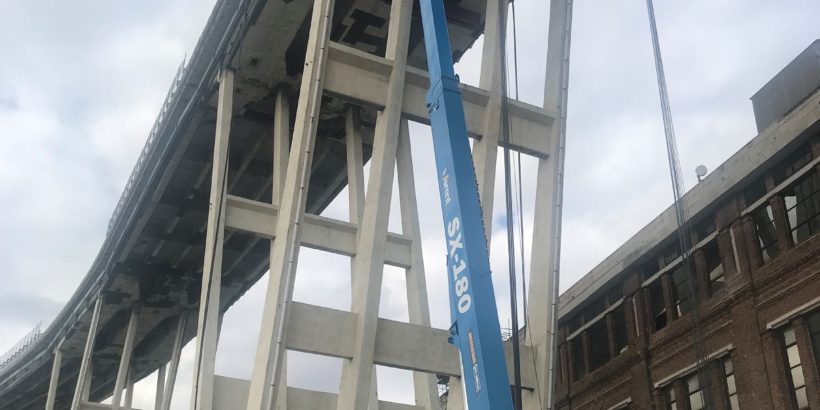 Since its partial collapse last year, concerns about the stability of the Polcevera Viaduct (better known as Ponte Morandi), prompted authorities to demolish the entire structure and rebuild it completely. As part of the demolition process, equipment rental company Werent Srl. recommended the use of two Genie® SX™-180 telescopic boom lifts, both of which were provided in a timely manner by Authorised Genie Distributors CTE SpA based in Rovereto (TN), Italy.

Inaugurated in the late 1960s, with its three 90-m (295 ft) reinforced concrete support pylons, the 1,182 km (0.734 mi) long, state-of-the-art Ponte Morandi, marked the introduction of a vitally needed connection for Genoa’s industrial and logistical districts to roads leading to northern Italy and the south of France. On August 14th, 2018, it became sadly famous when a 200-m (656 ft) section of the bridge and one of its support pylons collapsed resulting in the death of 43 people and the displacement of 556 residents from homes that existed before the bridge was built.

The initial demolition phase began in December 2018. Six months on, now almost clear of demolition debris, today the rebuilding of the collapsed portion of the bridge is well underway. Aiming for completion by summer 2019, while the new build continues, the two Genie SX-180 boom lifts are still playing a key role in the dismantling of the rest of the structure

As part of the demolition process, the two Genie SX-180 booms lifts are supporting workers involved in cutting the iron and concrete from the remaining part of the bridge. The process implies operating the booms lifts in parallel with the cranes needed to bear the weight and carry dismantled sections to the ground.

Enrico Piovan, head of the Werent branch in Venice (Marghera), explains the key challenges related to the site: “To perform their demolition task, workers needed aerial work platforms that would put them within easy reach of the road surface located 45 m (147 ft 6 in) from ground level. The job also implied extending the boom across an 18-m (59 ft) working area, the width of the viaduct’s carriageway. Following a thorough needs analysis and risk assessment, we recommended using two telescopic Genie SX-180 booms. This model’s combination of 56.86 m (186 ft 5 in) working height, which is the highest in the Genie range, extraordinary 24.38 m (80 ft) horizontal reach and a basket load capacity of 340 kg (749 lb) capable of lifting two workers and heavy equipment, made it the ideal solution for the job.”

The benefits of the compact Genie XChassis™ system

The machines’ wide range of motion was not the only specification required for demolition work. Even after prior preparation, ground conditions remained irregular, slightly sloping in places and encumbered by demolition debris. Space was also restricted, limited on one hand by the houses that remained standing close to the bridge, and on the other by the Polcevera torrent flowing close by. To allow demolition to begin as soon possible, and due to the strict organization of work between the various companies involved on the site, delivery of the two Genie SX-180 booms lifts was a matter of urgency.

Mr. Piovan explains; “The Genie XChassis™ system that is standard on this model was a key factor adapted to our urgent transport and space-restricted jobsite needs. Providing excellent stability, this patented Genie system notably allows the axles to be extended in about one minute, making transport faster and easier. Thanks to its narrow 2.49 m (8 ft 13 in) width, we were able to deliver both units rapidly on a standard low bed truck trailer, without the need to apply for oversize road permits or the obligation to organize transport overnight. The ability to extend and retract the machines’ axles to adapt to the limited space available on the jobsite also represented a considerable advantage for our customer.”

Due to lack of space, at each phase of the job, the two Genie SX-180 units could not be moved from their initial worksite positions at two different points on the site.

Smooth controls, easy to work with

Once in position, the machine’s 3.05-m (10 ft) jib, offering 60° of horizontal and 135° of vertical rotation, allowed demolition teams to reach the exact work area, accessing the highest and tightest areas quickly and easily. The ability to move the machine without needing to retract the boom, even when extended to full height, saved time, allowing the customer the advantage of significantly reducing labour costs.

No compromise on safety

Strong gusts of wind that are frequent in a coastal city like Genoa, and the tangle of iron and concrete resulting from the bridge’s demolition, were two risk factors that Werent assessed carefully before recommending the most appropriate access solution to its customer.

“As rental professionals, Werent’s main mission is to provide the most suitable machines to perform the job efficiently while maintaining high worksite safety standards. The Genie SX-180 boom lifts were well-suited to our demands both in terms of safety and productivity,” says company owner Michele Marraffa.

When its axles are fully extended, the Genie XChassis system provides an extremely stable 5.03 m x 4.72 m (16 ft 5 in x 15 ft 5 in) supporting base that is ideal even when weather conditions can be challenging.

The Genie Lift Guard™ Contact Alarm, a secondary operator protection system which is standard on all of the brand’s boom lift models, also provides workers the additional peace of mind they need to perform their task confidently when overhead obstacles can be a risk. Featuring an activation cable fitted above the boom lift’s platform control panel, when pressure is applied to the cable, it disconnects and activates the system. When the system is activated, all machine lift and drive functions are stopped to prevent additional movement in the platform, triggering an alarm and flashing beacon to alert staff at ground level of an eventual hazard.

Mr. Marraffa concludes: “Safety is always a key focus, and even more so in the case of the demolition of the Morandi Bridge. Being on this construction site does not leave us indifferent, and the frightening scenes of the bridge’s collapse that were broadcast on TV are often still on our minds. This makes us even more aware of the fact that safety is everyone’s responsibility. At Werent, safety at work and training our staff are all part of our strengths. We feel honoured and proud to be among the teams serving to secure a safe future for this infrastructure.”